This is the day (sniffle, sniffle) that the Wisconsinites leave for Glacier National Park. I will miss them terribly. Even their constant door-slamming that would rob me of much-needed sleep will be missed. If I had to choose between never sleeping again or keeping them forever, I would choose them. Those three people have very quickly become some of my favorite people in the whole wide world. And not only did they crack me up on a continual basis but they actually taught me a lot about forest and fire ecology. Funny and smart, what a great combo. In particular, they were studying the effects of a warming climate on post-fire tree growth in several parks. Thus far, the research has indicated that burned forests re-grow significantly slower in dry, warm years compared to cool, wet years. If things continue to get warmer, our trees and forests are in a lot of trouble. It’s scary to even consider the severity of the situation. Between slower post-fire regeneration and tree devouring insects no longer being killed off during cold winters it’s all a hot, bleak mess.

I thrust some farewell soap their way, had Andrew stick a sarcastic love letter on their dashboard, and bid them a sad goodbye. Then we were off to Grebe Canyon‘s Observation Point. And yes, we were hurting even before the hike but we were assured by Deb that it would be an easy day (I’m laughing as I write this). It was only one site and it was a mere kilometer off a well-traveled trail…piece of cake. Not! I’m starting to think that Deb is a robo-human. The trail started out level and easy for the first few miles. Such a nice walk. On the way in we saw a bison grazing nearby and not too far from it was a mother grizzly bear with three cubs. We were at a safe distance so I took my phone out and snapped a few blurry photos. We improved our karma by informing a few nearby fishermen that the grizzly family was headed their way. Then we started our 3-mile hike UP to Observation Point. As we were hiking we noticed that the grizzly family was headed our way–not the most reassuring realization. We ended up a little too close for comfort but that didn’t stop Andrew from declaring himself a jerk and snapping some photos before we got our hustle on. I remember the bear expert at safety training saying that you will never know if you’re a runner or a stander until you’re faced with a grizzly. I always assumed I would be the type to calmly stand and back away but that is sooooo not the case. Let me assure you, I did not run. It was more of a hybrid between walking and running. It was a brisk hustle. Luckily Andrew was behind me, calmly reminding me to slow down. After the adrenaline wore off and the coast was clear, we were faced with a seemingly never-ending uphill climb. The views of Cascade and Grebe Lakes, the Grand Canyon of Yellowstone, Hayden Valley, the Yellowstone River and Yellowstone Lake and Mount Sheridan were absolutely spectacular. You can literally see most of the highlights of the Park from up there. I highly suggest the hike but our bodies started out busted and every step just added to the pain.

It took us easily close to two hours to get to the top of Observation Point but it was glorious once we got there. There was a neat little cabin at the peak which I would love to make into my very own tiny house. Around the side of the cabin I heard Andrew make some amazing exclamations about the sheer size of something and that I had to come see whatever it was. I turned the corner to see him looking at the worlds most enormous chipmunk. Apparently they grow em real big up there. It looked like it was on steroids. It kept scurrying closer to us and inquisitively peering out from behind the boulders. Sometimes it would rest its arms on the top of a rock, clasping hands, tilting its head, and excitedly gaze at us.  It was rather comical. (Note: Deb has now informed me that there is a species of squirrel that has the same markings as a chipmunk. Mother Nature, you are tricky sometimes! I now presume this is what we saw…I don’t have the heart to tell Andrew though.) From the peak we had a 1 kilometer downhill, off-trail hike to the wetland. Ouch! There was even a boulder scramble thrown in there for extra masochism. The wetland was really nice and jam-packed with chorus frog tadpoles. Awe, I still love their googly eyes and pinched waists! It took a half hour to survey and then it was back up to Observation Point. We were on death’s door during the hike up. The only thing that kept our will to live intact was knowing that it was all downhill and on-trail as soon as we reached the peak. We eventually made it and headed back down to the valley.  The downhill walk was brutal on my already hurting joints. Every downward step just pounded the skeleton. Andrew was super quick, sometimes running down and peeling around corners, but I was slow as molasses thanks to my aching hip and knee. When did I become such an old lady? Once we got back down to Cascade Lake, we met several people who apprised us of all the bear goings on since we left. A fisherman got a great video of the mother bathing her cubs in the lake. And another visitor saw a bison charge the mother. So, regretfully, we missed a whole lot of excitement. As we bid them farewell, we noticed a few people in their group walking out of the woods where the grizzly family had been hanging out all day. Just when you thought people couldn’t get any dumber! Seriously!? The rest of the hike out was very hot and of course Andrew didn’t bring enough water so he was miserable. He was so out of it that he stopped to ask an older gent who looked like he just left the golf course if he had a water filter. The guy didn’t even have a water bottle! I eventually had to give him some of mine so we could make it to the car. Andrew is a piece of work…thankfully an awesome one. 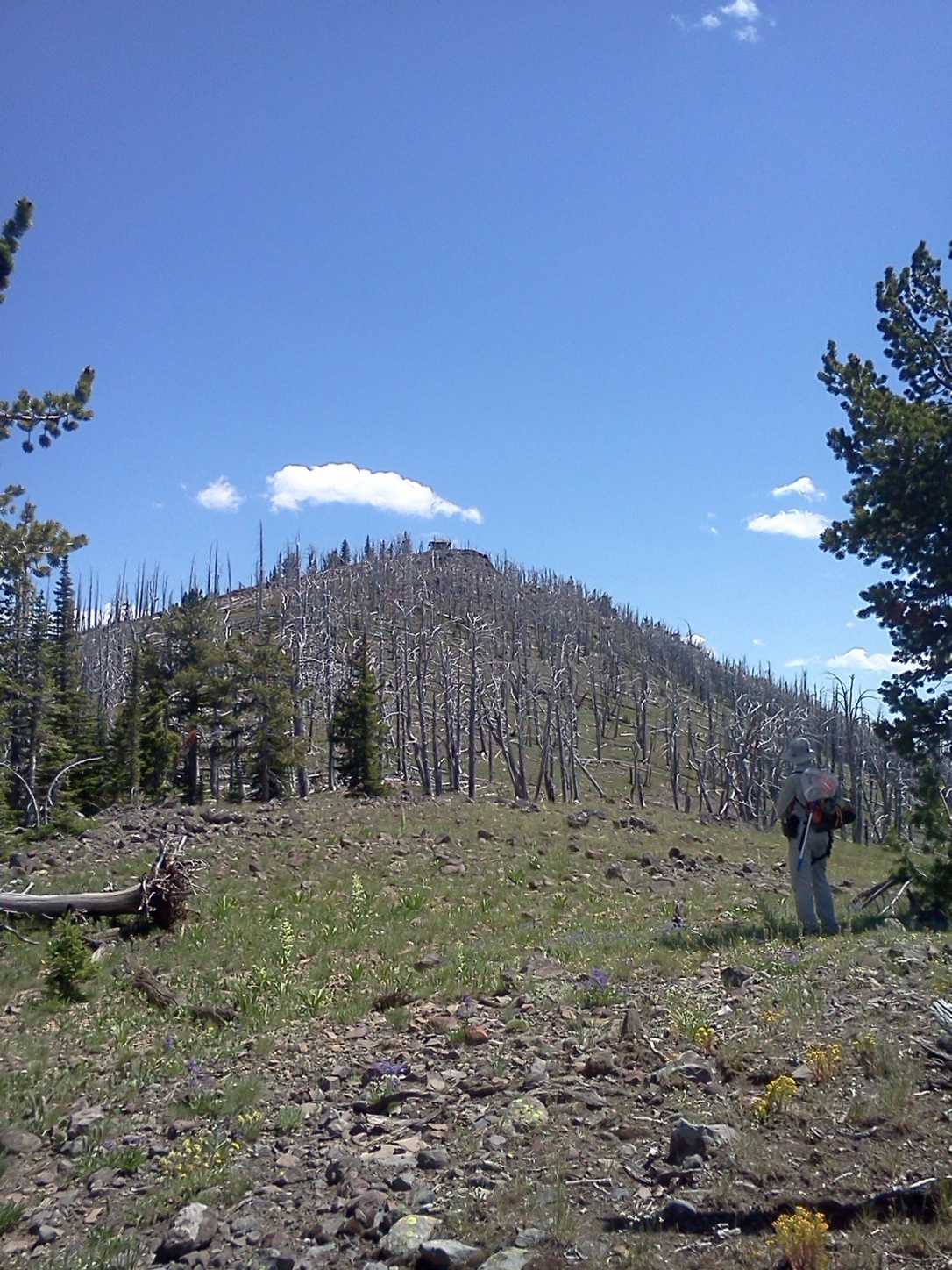 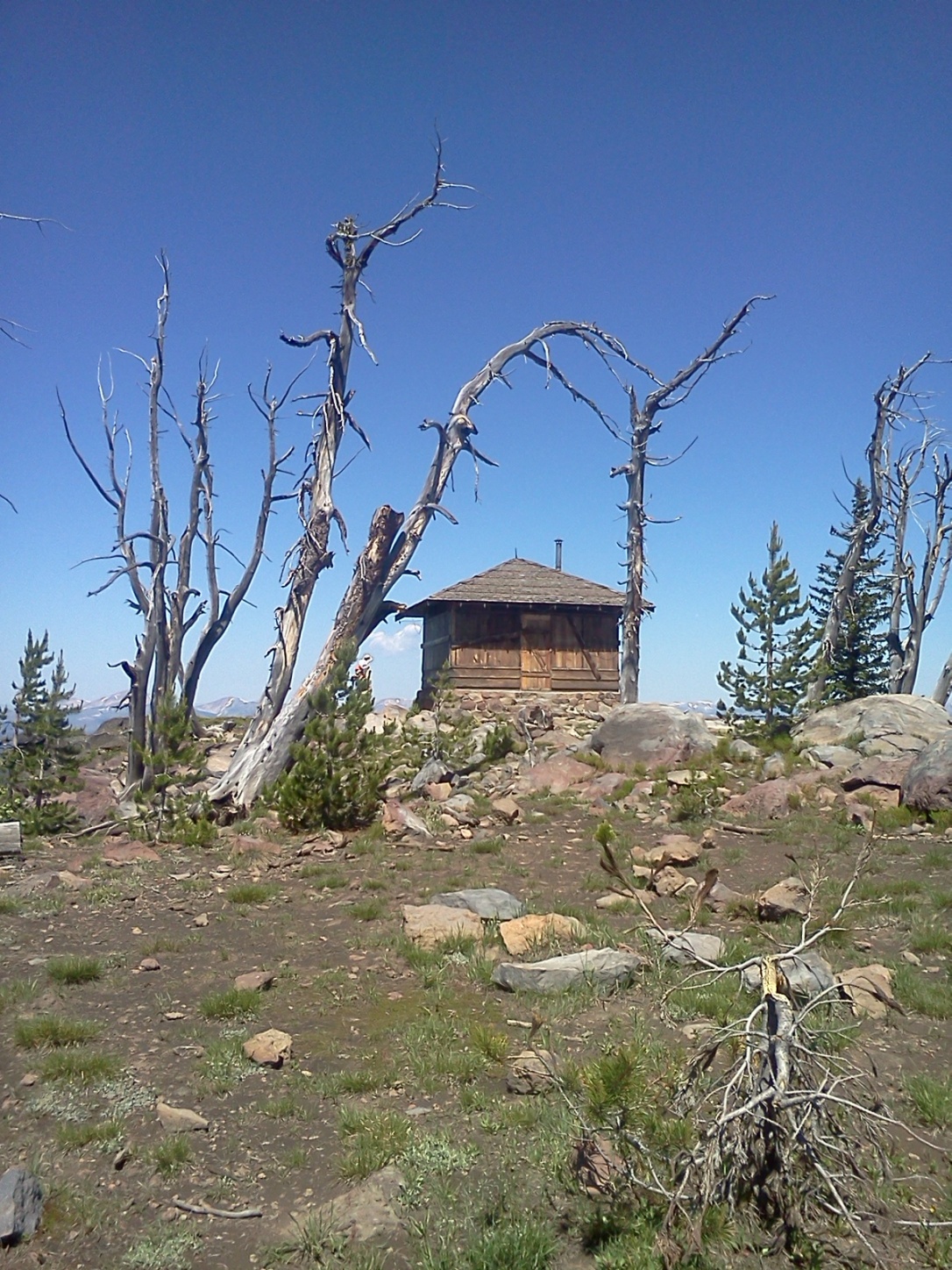 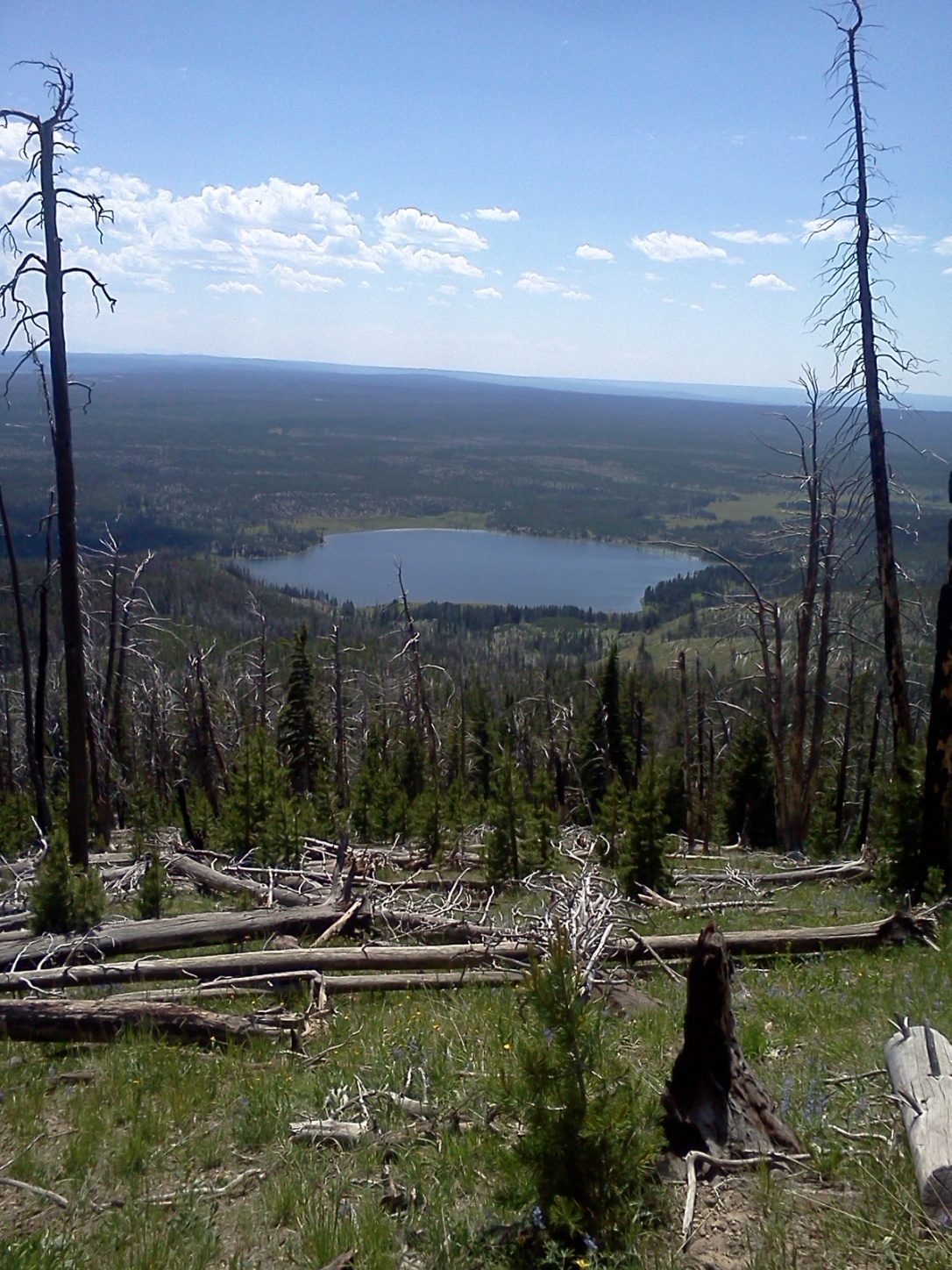 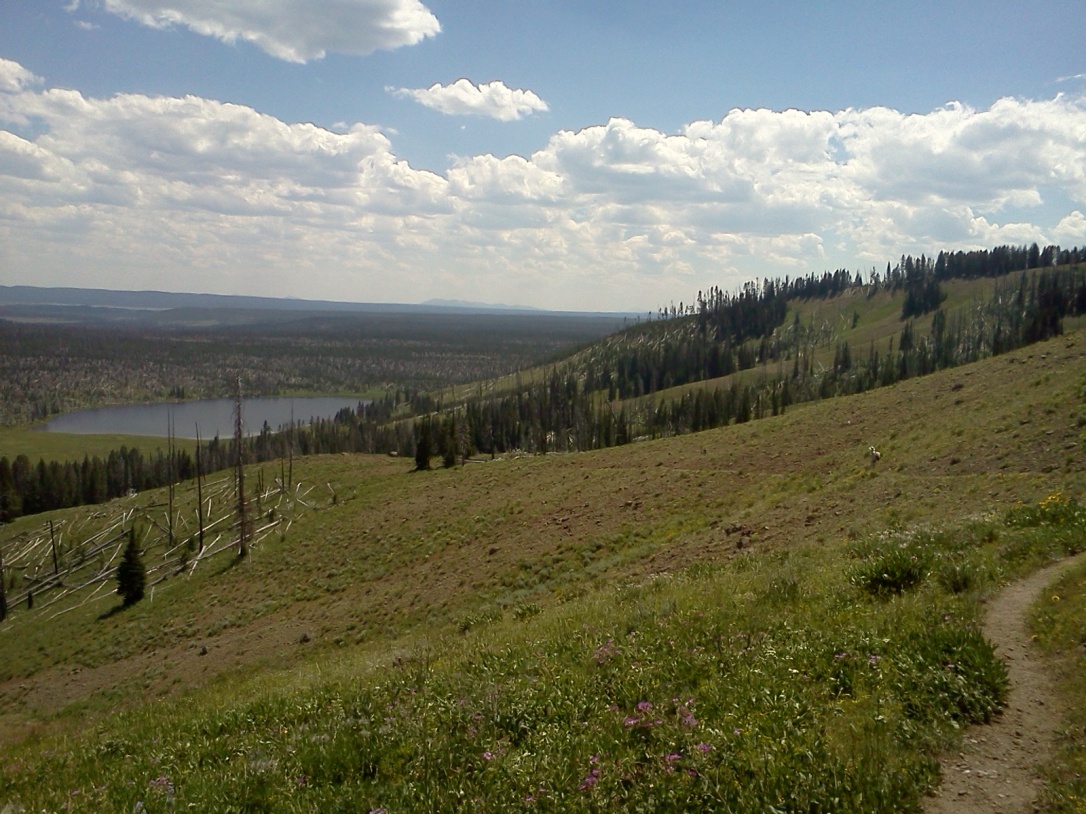 On the way back to the dorm we stopped off at the Canyon general store to get some groceries and the store patrons were horrified at the sight of us. We looked like the walking dead, hobbling around, with our clothes dirtied and disheveled. We were both lobster red and sweaty because the sun completely baked us. Compared to the pristine, finely coiffed tourists, we were a complete freakin’ mess. When we got home I made it a point to engage the butterfly people (Richard and Mardel) and one of the two wolf men in a discussion about astrology. Brian, one the Wisconsinites, described their astrological skills as feeling like they had “peered into his soul”. I had to get a taste of this magic for myself. The topic instantly animated this rather quite twosome. It was interesting to hear what they had to say. Upon first meeting they can usually accurately guess your sign and know who you will be compatible with. What amused me the most is that Andrew just stood in the corner and quietly took it all in. He doesn’t even know his own astrological sign and thinks it’s all hoopla so I couldn’t help but ponder his nay-saying inner dialog during the discussion. He’s a funny little stinker! I was in too much pain to sleep well, despite the Advil (I should be paid to promote Advil.). Once again, I was trapped in the forest, unable to get out. 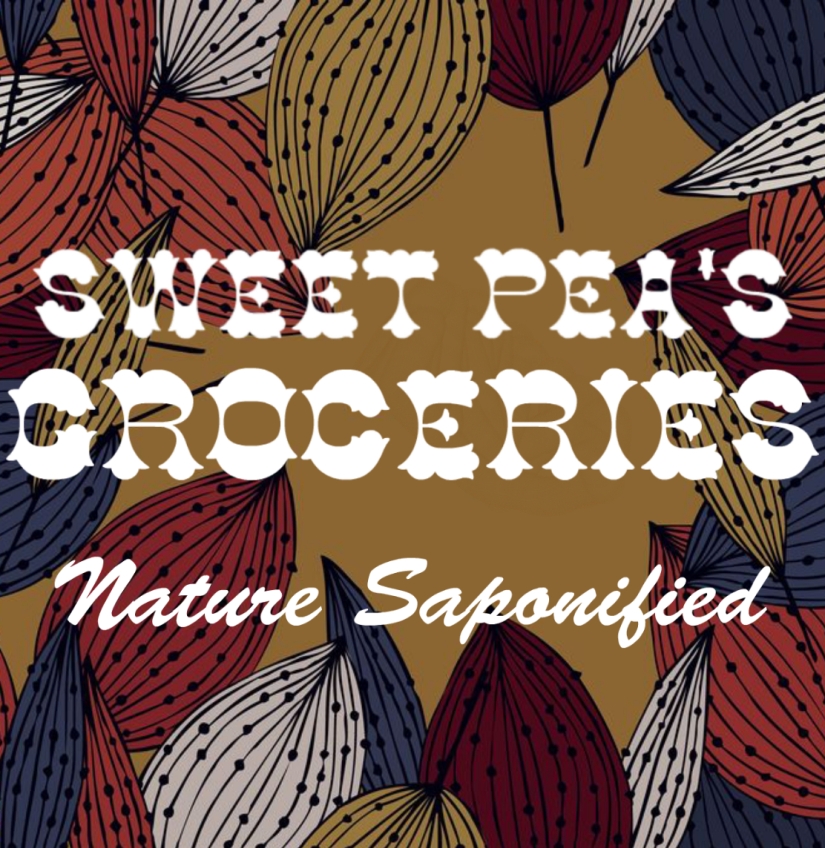